Gweedore Celtic has a long and distinguished history. It is one of the oldest clubs in the country. The club existed before the end of the nineteenth century but it was in the 1912-1918 period that they were better known for their feats. During that period they only lost one match. Winning many cups in the process. 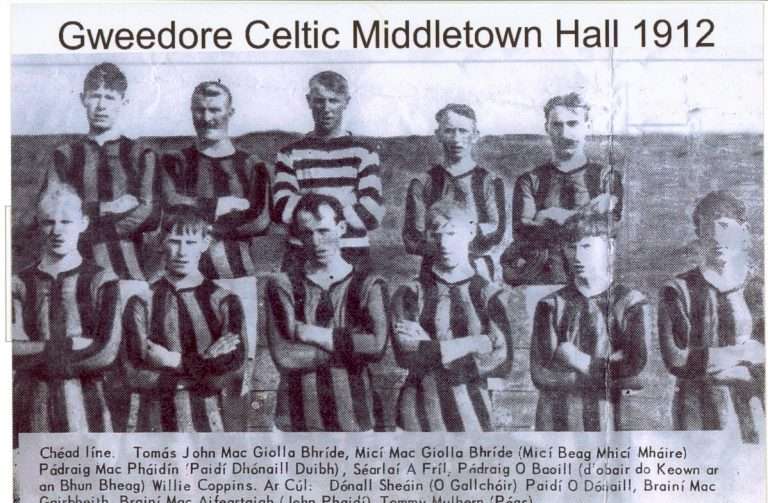 The club practically disappeared during the 1930’s, 40’s and 50’s due mainly to the establishment of the G.A.A. in the parish in 1931. In the fifties interest was revived again with the formation of the North West League in 1952. Con Mc Fadden (Bunaninver) was responsible for starting the Glassagh Celtic Club. Prominent also in the establishment of the same club were the Coyle brothers Francis and Barney, Mickey Gallagher, Padraig Mc Ginley, Jimmy Coyle, Neily Mc Hugh, Colm and Padraig Ferry, and Murry Coyle. 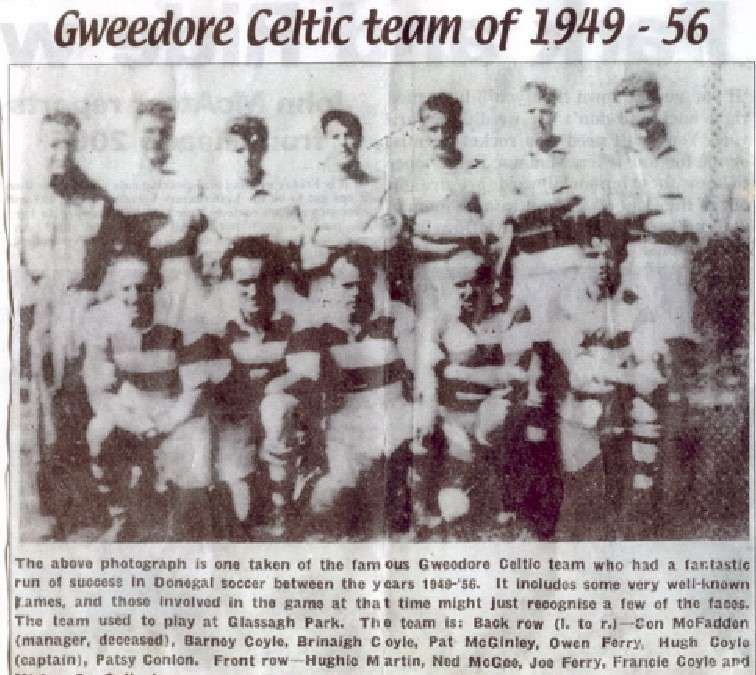 But Colm’s youth policy was beginning to bear fruit. A crop of young talent such as Hugh Rua Gallagher, Donal and Eamon McGee, Donnchada and Eamon Mac Niallis , Padraig, Jerry and Brian Coyle, Pat Doohan (deceased), Dermot Coll, Cornelius Mc Fadden, Piaras Coyle,  Jodie Doohan and many others were to be the foundation of what was to be the golden era of Gweedore Celtic. Between 1977 and 1987 the achieve the following honours;

They broke a lot of records including their 117 goals in one season which indicated their all-out attack style. Their achievements coincided with Donegal League winning the first major national title. The Oscar Traynor Trophy which is the Junior International Championship of Ireland. Six players from the club played in the Final, Donal Mc Gee, Donnchada Mac Niallias, Doalty Sweeney, Jerry Coyle, Pat Doohan (deceased) and Hugh Rua Gallagher who had the honor and distinction of captaining the team. 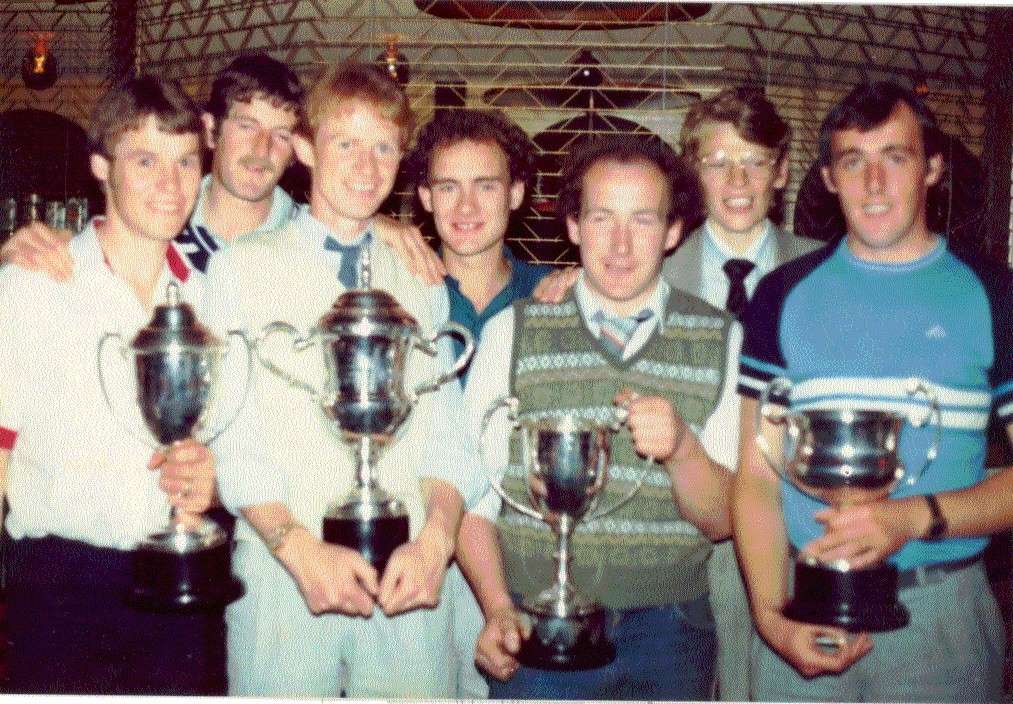 In 1986 the club along with the majority of the Donegal Premier League teams joined the newly–formed Ulster Senior League. By this time many of the players who had played with distinction had reached the end of their careers and found it difficult to achieve the same form at that level. In 1995 the club decided to revert to the Donegal League. The team reached the semi–final of the Junior Cup and was knocked out by Calry Bohs, of Sligo, in the national competition. In the same year they became Ulster Junior Cup Champions when they beat Glenea United in the final.

They repeated the feat the following year by beating Cockhill Celtic. The club experienced lean time in the followings ten years and even had a spell in the first division.

Hugh Rua Gallagher tried to reinvent the glories of the mid-seventies, starting again with the youth of the area. In 2005 the Youth team captured the Youth League and the Ulster Youth Cup with Fanad United pipping them in the League Cup. In 2006 the youths finished runners-up to Fanad in the league and Cup. The nucleus of the following year’s senior team was drawn from that successful youth team. Players like Paul Gillespie, Eamon, Paul and Micky Curran, Michael Mc Kelvey, Colin Ferry, Gary Whoriskey and Matthew Smith were the backbone of the senior team. Along with veteran Georgie Doherty , Kevin Friel, Liam and Paul Mc Bride, Ciaran Ferry, Damien O’Sullivan and Prionnsais Forker.

The club could look forward with confidence to the future.

In the past success was enjoyed on the field; however club facilities off the field were poor. It became clear that in order to attract young talent in the future, playing conditions would have to improve. In the nineties land was purchased on An Screaban near the Gweedore Industrial Estate and for the next fifteen years a lot of club energy went into developing an attractive environment for the future. Johnny Coll and Charlie Doherty were instrumental in driving the project forward.  The new facilities consist of a club house, enclosed astro pitch and a new soccer pitch. This development would not be possible without the generosity of the people and businesses of Gweedore. 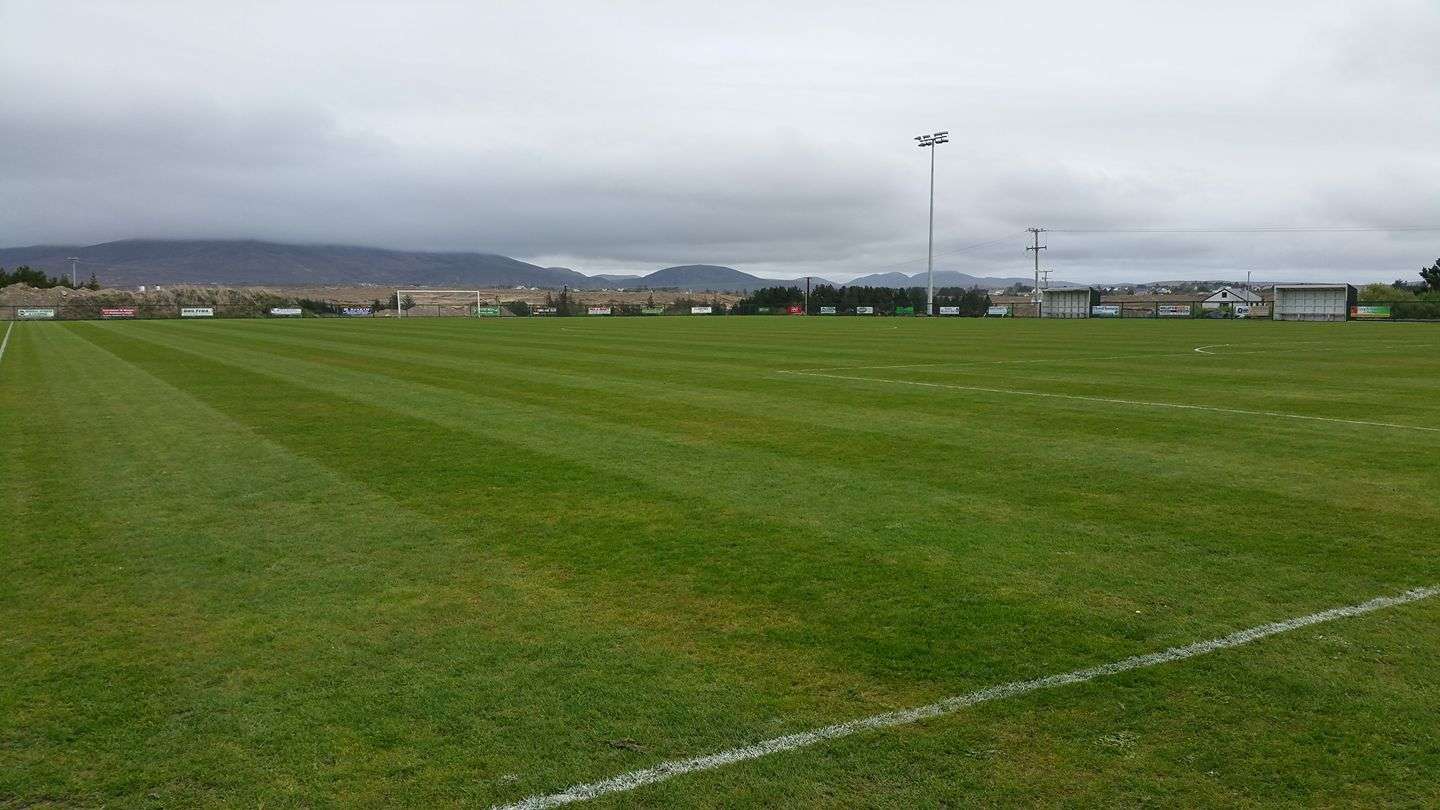 The new facilities brought new energy to the club and attracted new talent. With the help of the new management team of Hugh Rua Gallagher, Paddy Duggan and Donal Mc Gee, Gweedore Celtic won the Donegal Premier League in 2011 and the Donegal League Cup in 2010 & 2011. Recognition of the efforts of the club came with the FAI Club of the Month Award for November 2012.